Savannah and the American Home

A pattern that persists throughout the history of American home life is the cultural tension between dynamic urban spaces and bucolic rural spaces. Born without Europe’s thousand-year-old habit of lords and merchants living inside city walls served by serfs in the hinterland, Americans have been historically free to roam the countryside and claim land for themselves (slaves and native peoples notwithstanding). Americans see no hard, “European” distinction between a city and the countryside. This ability to freely select our environment created a desire to work in the dynamic, freewheeling urban, and live in the calming, bucolic rural. Naturally, this desire has translated to the way we physically build our towns and cities.

The ideal American home was the country house supported by a nearby town where the breadwinner would commute to and from the urban space for work. The emergence of the automobile afforded ordinary Americans the ability to sprint into the countryside and claim this “American Dream” for themselves. Urban amenities (shops, theaters, factories, offices, schools, etc.) were detached from the home. In this sub-urban space, the home was to be a sort of “country house” in a sub-rural space— one with the calm beauty of a rural existence, but without much of the work that would normally accompany separation from urban services.

Image 1: A Ranch Style home advertisement in contrast to the type of site it was often installed into. Note the enforced separation of housing space from urban amenities.

Unfortunately, the development pattern that emerged to support the counter-intuitive desire for a rural country house in driving distance of urban amenities is financially and spatially unsustainable. Thanks to the proliferation of country houses on single family lots, everyone must drive everywhere, and additional retail space is required to spread out to adequately serve the dispersed population. As Strong Towns notes, both our road and retail capacity are overbuilt and financially underwater. This is to say nothing of the suburban home itself, which is usually funded with government backed loans and utilities subsidized by downtown urban spaces.

The desire to fruitfully manage the interaction between urban and rural space is not in and of itself wrong. Rather, the problem is that the way we have executed the servicing of this desire will eat away at the wealth of our towns and cities. We need to find another paradigm to inform our management of the cultural tension between urban and rural space in America’s development.

Of all the cities I’ve visited across the United States, I think Savannah, Georgia’s downtown is the best example of a merger between American’s preference for rural home space and urban space. Most of downtown Savannah’s parcels and blocks are as dynamic as any American midsize city, while its consistent rhythm of naturalistic park squares are as beautiful as any homestead garden.

1. An Alternative to Home Setbacks

One of the most endearing elements of both rural and suburban design is the setback of homes from the right of way. The most important effect a setback provides a home is an effective “moat” of private space from public space. If someone is standing on your yard, you tend to notice their presence rather quickly. In this way, the yard (or garden, porch, driveway, etc.) creates a psychological deterrent for people that might intend to encroach on your space. And the fact the yard’s deterrent exists tends to provide occupants of the home a sense of safety. In urban spaces, land is at a premium and rarely squandered on yards and setbacks from the street. Urban spaces must provide the same sense of security a yard provides without a yard setback.

Downtown Savannah has the best urban solution to this security problem I have ever seen. Many homes in Savannah feature a partially sunken basement as their first floor. This basement level is sometimes a secondary entrance that features a very heavy door to deter intruders; or, (as many homes do) the basement level may not have an exterior entrance at all. A second “main” floor for daily use is accessible by a set of stairs running parallel to the street. The pictures below illustrate the effect.

The steps for the homes’ elevated entrances integrate elegantly with sidewalks. Sidewalks are wide enough to provide sufficient pedestrian space and a buffer for automotive traffic.

I doubt Savannah invented this solution— nonetheless, it is ingenious. The elevation of the main entrance of the house above street level establishes the same deterrence a yard provides in suburbia. The option to include a secondary street level entrance allows residents to transform the lower level into a flex space (think a guest bedroom, playroom, or man-cave).

These second-floor main entrances to Savannians’ homes are so common because the city promotes their implementation. Savannah allows residents’ staircased entrances to encroach on the sidewalk right-of-way. This policy allows the municipality to enforce a common “build-to” line along the street while encouraging a type of entrance that is harmonious for both private and public space.

2. Common Yards for All

When designers of all stripes think of Savannah the first thought that likely comes to mind tends to be the city’s rhythmic pattern of squares in its downtown. Savannah’s squares are the critical element that facilitate the downtown area’s merger of the rural and urban elements of American building culture. Experienced urban designers have said Savannah’s squares are too big in relation to the theoretical dimensions of a “good” city square. I suggest that the oversized nature of Savannah’s squares is precisely why they are effective. The function of a Savannah square is not to be a good urban square, but to present the illusion of relative seclusion.

Parks are a better way to describe the function Savannah’s squares serve in the downtown. In suburbia, residents use backyards as a means of secluding themselves from the urban world they just spent eight or more hours within. Backyards function as residents’ own personal park. Thus, we acquire new insight when we think of Savannah’s “squares” as parks.

A Savannah square with several vertical elements implemented to provide partial seclusion within the square. Note how the statue prevents a complete view through the center of the square.
On the opposite side of the statue pictured above, where three people are reading in relative solitude on a bench unnoticed.

A square is a public meeting place. A person looking to be alone with their thoughts does not go to a square. On the other hand, seclusion is expected in a park. And seclusion is expected in a rural setting’s wide-open fields and suburban backyards. Savannah has transplanted the suburban backyard amenity by establishing a series of equidistant, easily accessible parks within its downtown.

Savannah’s squares create this seclusion by designing the park-space to be opaque. It’s difficult to see who or what is within a Savannah square from the streets and alleys that surround them. Trees, shrubs, monuments, and benches block the view. Moreover, there are so many squares within the space of the downtown that only a small portion of the population tends to be within a square at any one time.

Imagine a typical workday and being able to enjoy a quiet lunch with a few friends (or by yourself) in a park that’s at most 600 feet away. Or imagine owning a home in a place where a substantial public park is only a block down the street, all the while retaining the amenities of a great urban space. Or imagine experiencing both scenarios simultaneously because you live and work in the same building. Savannah’s squares make that possible.

One of the most powerful elements of Savannah’s built environment is the extent to which nature is integrated into its scenery. While it can’t recreate the pastoral scenes of a bucolic rural existence, there is sufficient greenery in the downtown area to beautifully soften the hard edges of its urban elements. This effect should not be underestimated. Studies have shown that trees have a positive impact on property values in almost any context. Savannah’s planners and landscape architects have done a great job creating vaulted green ceilings on the downtown’s streets and squares.

To further the presence of nature in the downtown, Savannah has promoted vegetation in some unexpected spaces. Micro-gardens can be installed into the sidewalk in front of many homes. As it has done with home entrances, the city has ceded some right-of-way to optional development by residents. Permitting these sidewalk gardens vastly beautifies the street. If enough residents participate in planting their piece of sidewalk (something for which there are surely neighborhood competitions), the plantings work together to create a sense that a pedestrian is walking through an urban garden. Walking these planted streets is one of the most calming walks one can experience in a place that features substantial urban development. This policy of rearing sidewalk gardens is yet another example of combining the best of urban space with the best of rural space. 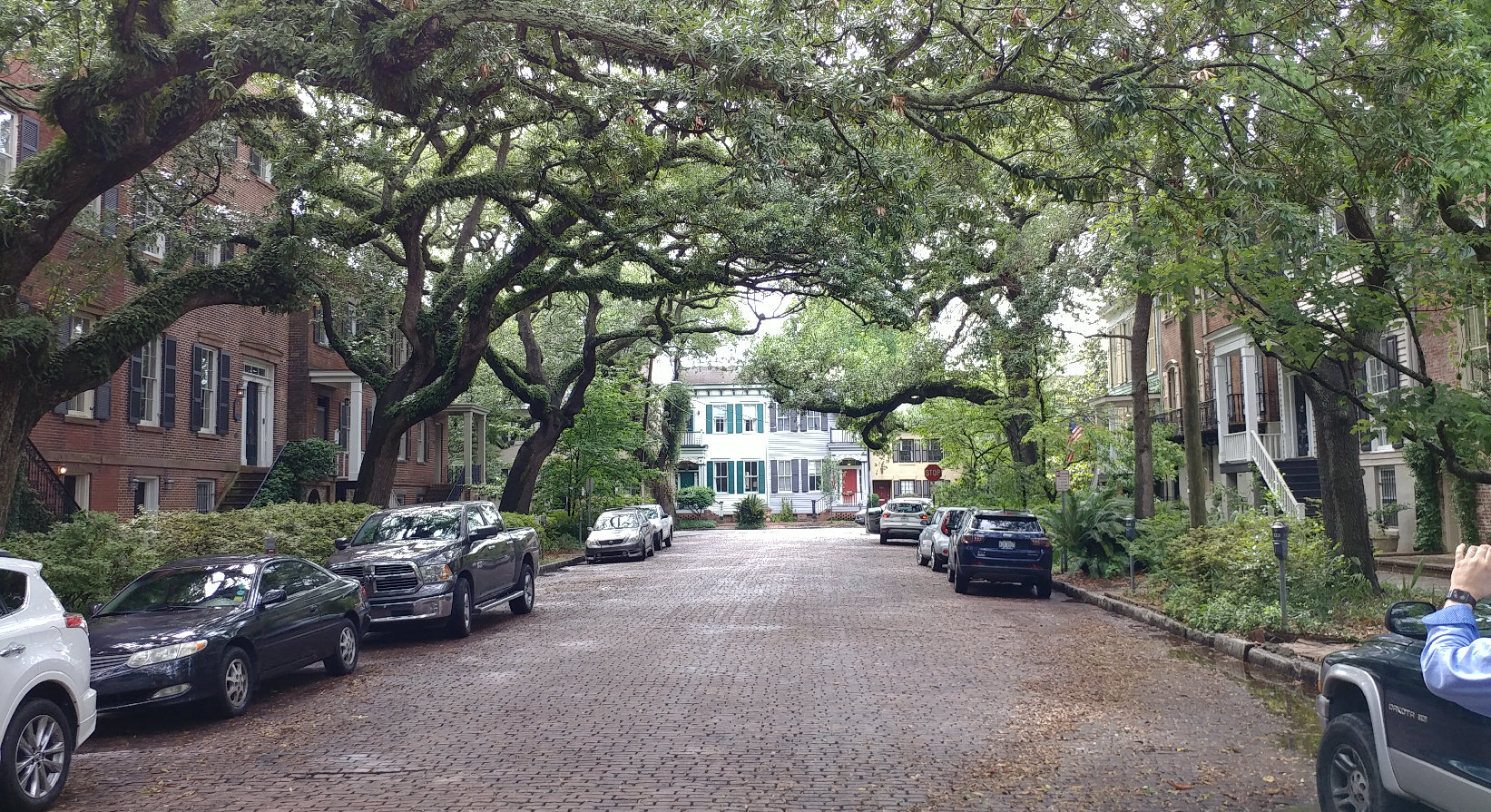 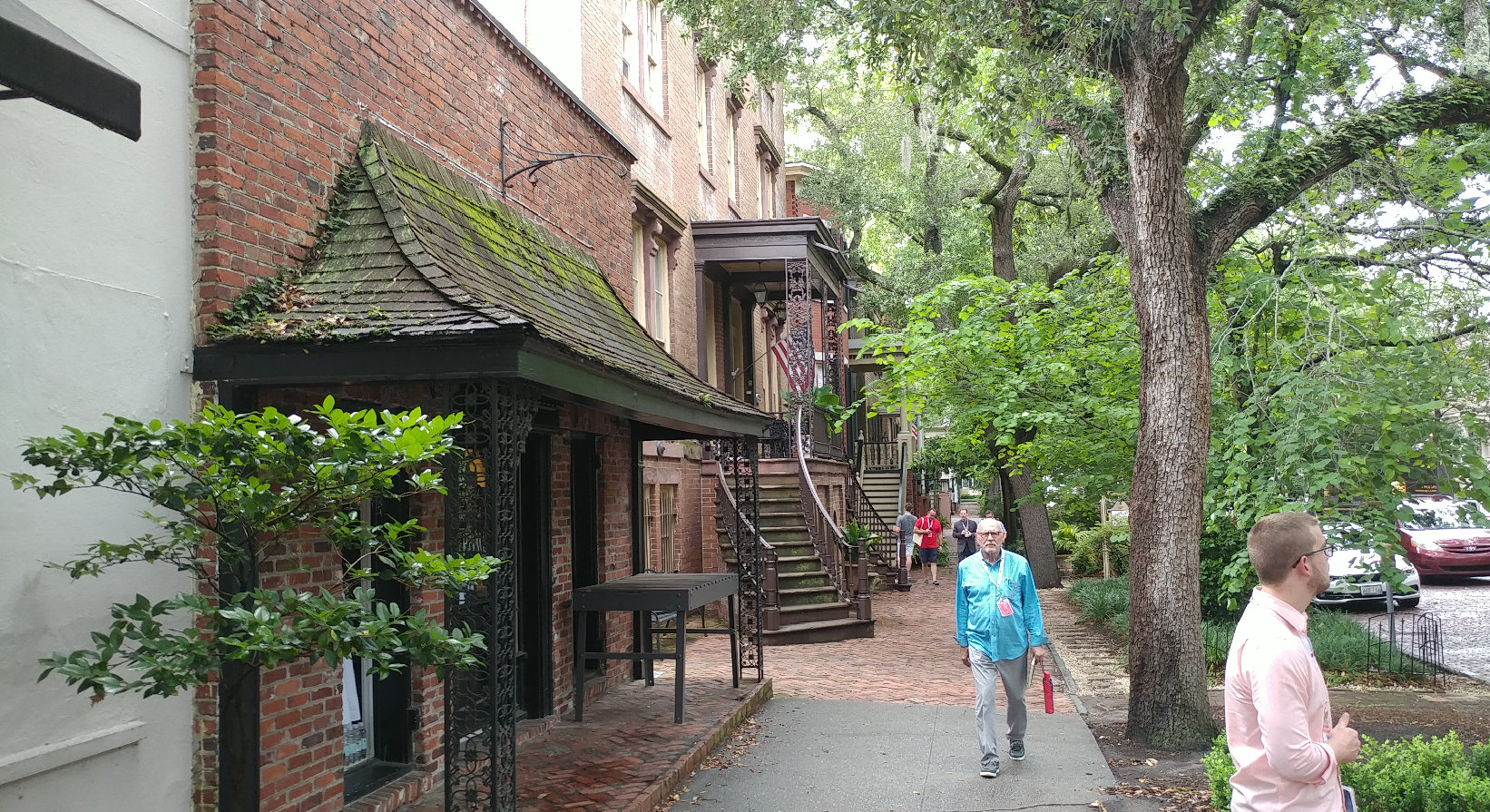 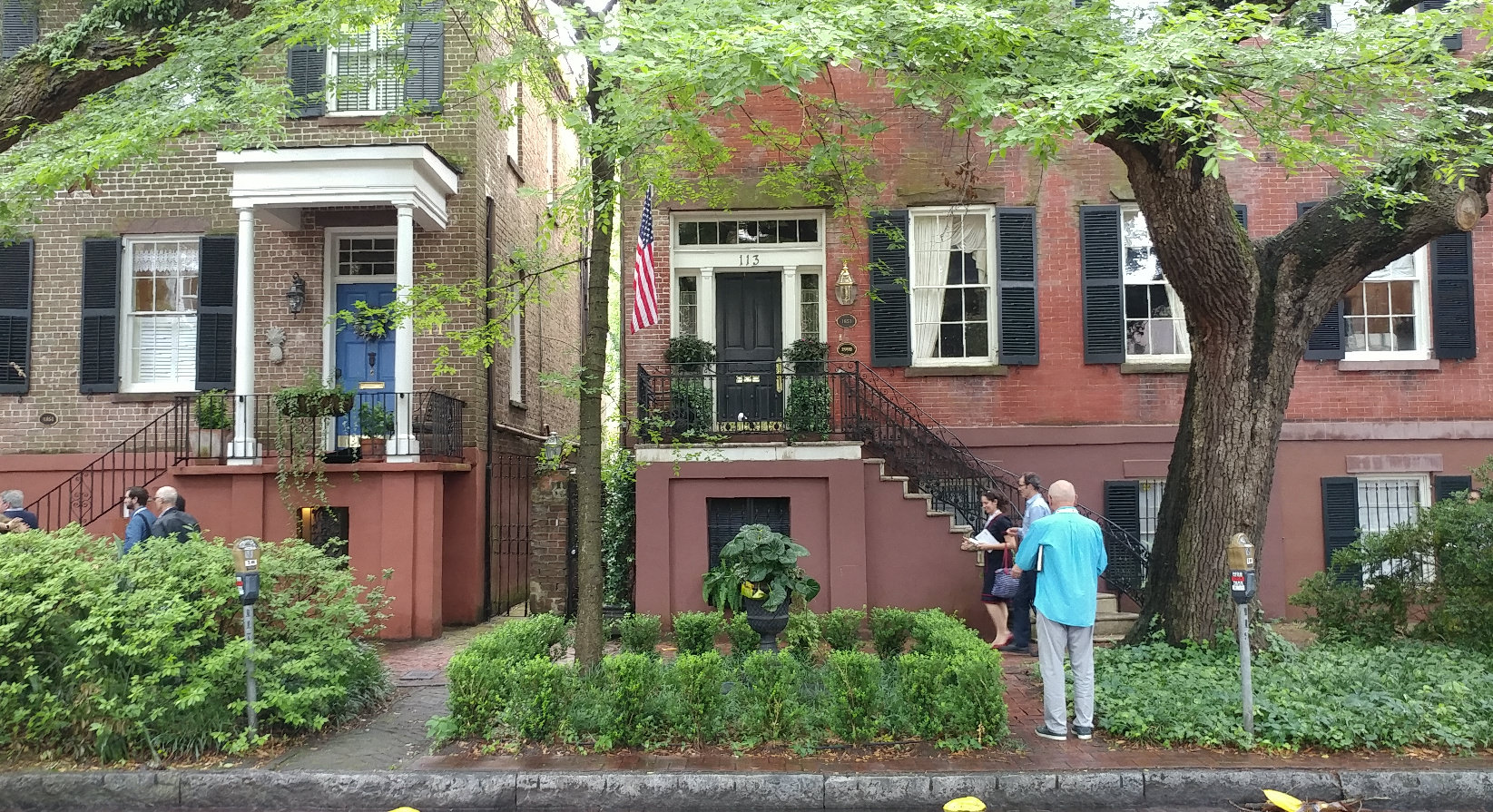 Another essential contributor of Savannah’s state as a “city in a garden” are residents’ private gardens. Because they exist on private land, it is easy to dismiss these gardens as being the purview of the individual stewards of a parcel. To some extent, this is true: not everyone has the time or money to manage a home garden. However, many people do have the time to manage a garden but are stymied by cities that outlaw gardens through zoning. Savannah encourages gardens on its private lands.

A beautiful private garden in downtown Savannah. These are fairly common throughout the downtown.

These private gardens tend to fulfill individual residents’ discrete desires for a bit of their own greenspace. Much like the fenced-in yards of suburbia, these gardens allow for some individuality in what would normally be monotonous rowhomes. Within every hidden garden with flowers spurting over its walls and vein of ivy clinging to the side of a home, we find a bit of each resident’s personal creativity.

Downtown Savannah is America’s premier synthesis of rural naturalistic beauty and urban freewheeling dynamism. While other places have tried and succeeded in replicating Savannah’s common yards and emergent gardens to some degree, (Brooklyn Heights, Seaside, the areas around Boston’s Emerald Necklace, and Atlanta’s emerging Beltline come to mind) Savannah’s downtown is the only area in America I know of that features a replicable, consistent example of continuous urbanity successfully immersed in nature. There’s something uniquely endearing about places that successfully integrate nature and the built environment. Savannah’s downtown does that better than any other city in the United States.

This article was originally published on StrongTowns.org.

Left Photo: A rural garden in the UK designed and photographed by Antonia Schofield.

All other images in this post are the property of Alexander Dukes.